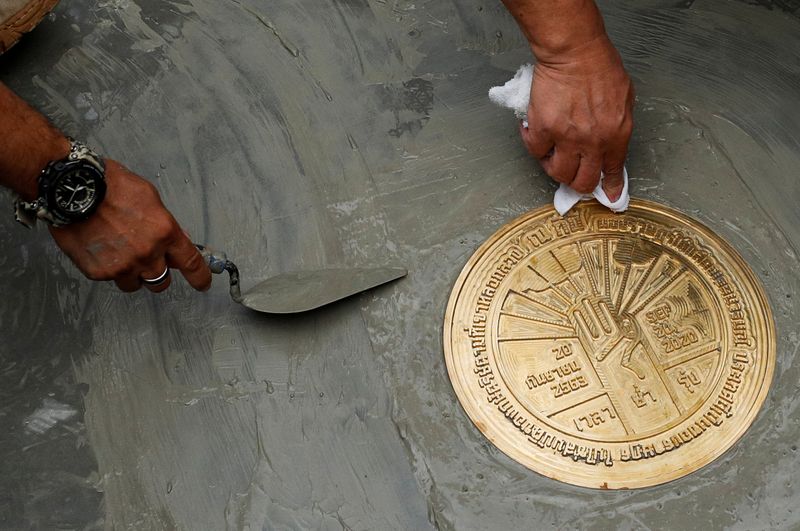 Student leaders install a plaque declaring “This country belongs to the people” during a mass rally to call for the ouster of Prime Minister Prayuth Chan-ocha and reforms in the monarchy, near the Grand Palace in Bangkok, Thailand, September 20, 2020. REUTERS/Jorge Silva

BANGKOK (Reuters) – In a challenge to the monarchy of Thai King Maha Vajiralongkorn, protesters on Sunday cemented a plaque in the field next to the Grand Palace in Bangkok that declares Thailand belongs to the people and not to him.

Protests that have been growing in the southeast Asian country since July have broken a long-standing taboo by criticising the monarchy as well as seeking to oust the government and bring in a new constitution and elections.

The plaque was cemented in the area known as Sanam Luang – Royal Field – shortly after sunrise. It reads “At this place the people have expressed their will: that this country belongs to the people and is not the property of the monarch as they have deceived us.”

The Royal Palace was not immediately available for comment.

Government spokesman Anucha Burapachaisri said police would not use violence against protesters and it was up to them to determine and prosecute any illegal speech. Police were not immediately available for comment.

At the biggest demonstration in years on Sunday, tens of thousands of protesters cheered calls for reform of the monarchy as well as for the removal of Prime Minister Prayuth Chan-ocha, a former junta leader.

“The nation belongs to no one person but to all of us,” one of the protest leaders, Parit “Penguin” Chiwarak, announced at the ceremony for installing the plaque. “Down with feudalism, long live the people.”

Police have held back from the protest and made no attempt to intervene.

Protesters have said they will march from the scene of the ceremony at 8 a.m. (0100 GMT).

The plaque resembles one removed without explanation from outside one of the royal palaces in 2017, after Vajiralongkorn took the throne. That plaque, which had commemorated the end of absolute monarchy in 1932, was replaced by one with a pro-monarchist slogan.