As we all move into a hopefully much better 2021, here are three things you can do to improve your experience as a photographer for the coming year.

Take a Moment to Revisit Your Previous Work

Sometimes you’re too deep in the woods to see the forest for the trees. Like when your spouse borrows your car for an errand only to come back and tell you, “By the way, your brakes are going.”

Why don’t you see that? Because your brakes are worsening a tiny bit each day, often too slowly for you to notice.

It’s the same with your growth as a photographer, only it is happening in reverse. If you are feeling a little down on your recent work — and who among us might be during this hobbled year — take a look at something you did five or ten years ago and see how you feel about it now.

What do you think about it now? With the benefit of the added experience you have gained since shooting it, what would you do differently?

Take, for example, the photo above of blacksmith Albin Drzewianowski. I shot it ten years ago, for the for Howard County Conservancy. At the time, I was very pleased with it. And in some ways, I still am. But as a lighting photographer in 2021, there sure are some things I’d do differently now.

The room is essentially black. There are a couple of small lights, as I was being videotaped when I shot this. But they were dialed down and carefully aimed out of frame as to not influence the scene.

Here is a lighting diagram, to give you an idea of what’s going on: 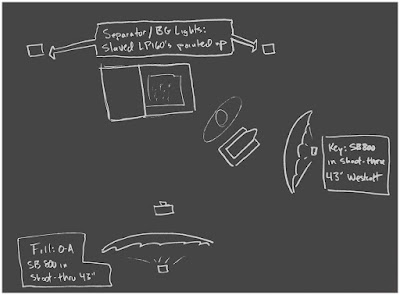 The flashes blasting into the rafters give us light that is coming from top/back. That light is warm (because they are reflecting off of wood) and bathe the scene. This built-in warmth is one of the things I still really like.

We left the shutter open to let both the fire in the forge and the glowing cast iron burn in.

The key light is fine for intensity and location. But it’s only barely warmed. Maybe a straw-colored Rosco 08. It should be much warmer — with some red in there, to help to visually connect Albin’s face to the hot glowing object he’s working on. So, call it 1/2 CTO at minimum, maybe a full CTO.

Plus, why do I have the light falling on the front of the crate? Ugh. Now, I’d want to use something directional — even a tiny 8×9″ soft box would work fine — and feather it upwards. Keep the light off of the front of that crate and anvil. That would further the illusion of the glowing iron lighting his face.

Now onto the fill light, which is a tad too bright and neutral colored (i.e., white). WHY IS THE FILL NEUTRAL, DAVE? There is zero reason for white light to exist in this room. It would have worked so much better with some blue in there — maybe even with a bit of green added to it to further muddy it up.

So, not only would the fill light have given legibility to the shadows, it would also have set up a warm-highlights-to-murky-blueish-shadows contrast. Think of the fill light as setting a cold / dark visual ambient environment before the fire came in and warmed everything up.

The point here is not to make myself feel bad (that’s just a bonus!) The point is to realize that, even if we don’t see it, we are always growing in small ways, every day. That’s a good thing to know, and why it is a good idea to revisit your past self to help in evaluating your present self.

Take Stock of Your Gear

My dad once told me that every possession is also a burden. I remember thinking, that’s the dumbest thing I ever heard. I like my stuff. I picked it out myself.

Now that I am 55 years old, I realize how right he was. And the turn of the year is a great time to take a long look your gear and see what among the various pieces is still productive and what is just psychic dead weight.

You might decide to re-allocate, maybe sell some stuff on eBay and re-deploy the money towards a smaller, newer, more capable gear pack. Or maybe your stuff is long enough in the tooth so where the best thing to do would be to gift it to a young-but-cash-strapped photographer and make their day. Pretty easy and way to be a hero, come to think of it.

It happened to me when I was young. It’s a big deal. And I have paid it forward several times since. I can heartily recommend it.

If you have found yourself losing your spark for photography, it might be because the stuff you end up shooting by default holds no meaning — neither for you, nor for your poor viewers. Like, what is your purpose as a photographer?

I think of this concept as my compass point, which is a term I first heard from Amy Deputy, one of my picture editors at The Baltimore Sun in the late 1990s. That opened up a whole new way of thinking and growth.

So, a quick thought exercise, which we will explore more in-depth in the coming months: make a list of the things you are good at. Think hobbies, expertises, vocational specialties — everything. Cast a wide net. The stuff you expect to list, sure. But also the really weird stuff as well.

Next, make a similar list of the things that are important to you. Things you are passionate about. Things you love. The expected stuff, yes. But also the weird stuff here, too.

Carry those two lists around with you, on your phone or on a sheet of paper. Add to it when the ideas strike you.

As you start to internalize the things on the lists, you’ll start to get ideas for the things you’d love to photograph. They might relate to individual items on the list, or even better, projects at the intersection of two, three or more of those items.

This is an informative, instructive and extremely liberating process to continually apply. And there is no better time to do it than when you are turning the corner into a new year.

Especially when turning the corner from an absolute shit 2020 into what I sincerely hope for all of us will be a much brighter, and healthier 2021 for all of us.

This article was published as an entry in the Strobist Lighting Cookbook. New articles and how-to’s appear monthly. To receive notifications for new posts, you can follow via email or via Instagram.

Tips for Photographing Birds in Flight

This article introduces some key concepts for p
Read More

Is It the Perfect Action Camera for You?

6 Tips for Capturing Dramatic Skies in your Landscape Photography