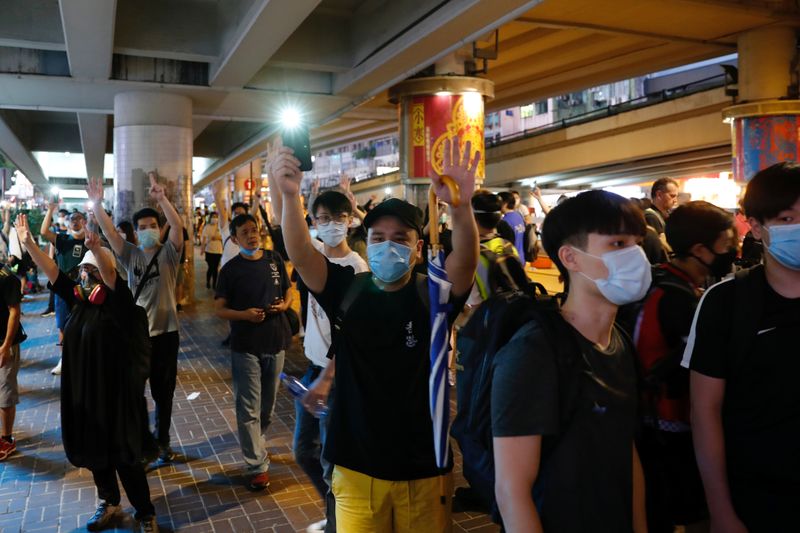 By Sarah Wu and Scott Murdoch

HONG KONG (Reuters) – Hundreds of riot police took up posts in and around Hong Kong’s financial district on Wednesday ahead of a debate at the city’s Legislative Council over a bill that would criminalise disrespect of China’s national anthem.

Protests have returned to the streets of the Chinese-ruled city after Beijing last week proposed national security laws that drew global condemnation amid fears they will curb the freedoms enjoyed in the global financial centre.

Protesters used bins and other debris to block some roads and police warned commuters to expect delays.

Activists say the security laws could bring an end to the autonomy of China’s freest city, supposedly guaranteed under a policy known as “one country, two systems” established when former colonial power Britain handed Hong Kong back to China in 1997.

Chinese authorities and the Beijing-backed government in Hong Kong say there is no threat to the city’s autonomy and the laws will be tightly focused.

Police vans and officers lined roads near the heart of the financial centre as authorities braced for fresh protests.

“Although you’re afraid inside your heart, you need to speak out,” said Chang, 29, a clerk and protester dressed in black with a helmet respirator and goggles in her backpack.

“Our daily actions are now whether we need to buy a VPN, what to bring out because we’re afraid of stop and searches.”

Authorities erected a wall made of two-metre-tall (6 feet), white and blue plastic barriers filled with water around the city’s Legislative Council, extending across a nearby park up to Victoria Harbour.

U.S. President Donald Trump on Tuesday said the United States would announce before the end of the week a strong response to the planned security legislation for Hong Kong.

When asked at a news briefing if the response would include sanctions, he said: “No, it’s something you’re going to be hearing about … before the end of the week, very powerfully I think.”

White House spokeswoman Kayleigh McEnany had earlier told a briefing that Trump found it “hard to see how Hong Kong can remain a financial hub if China takes over.”

The anthem bill is set for a second reading on Wednesday and is expected to be turned into law next month. It requires China’s “March of the Volunteers” to be taught in schools and sung by organisations, and imposes jail terms or fines on those who disrespect it.

Opponents say it represents another example of Beijing encroaching on Hong Kong, while supporters say the city has a duty to ensure national symbols are treated respectfully.

Here are the prominent Republicans not supporting Trump, and those who are supporting Biden