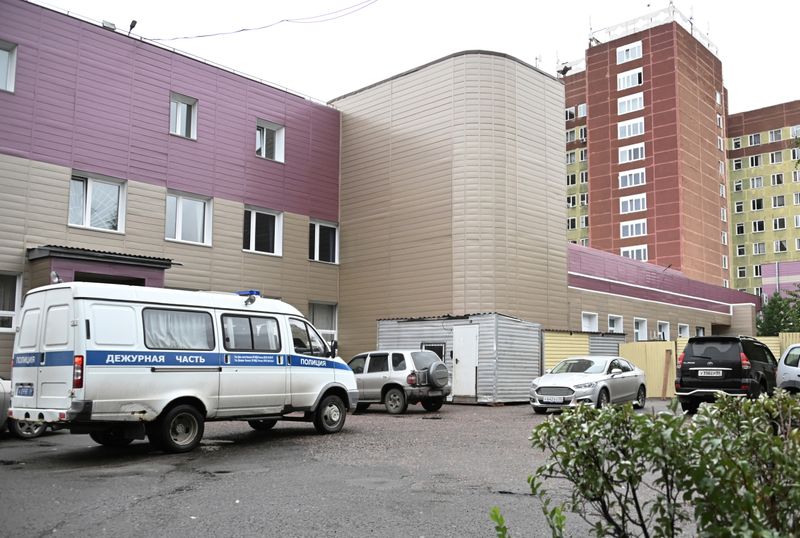 By Andrew Osborn and Anton Zverev

MOSCOW (Reuters) – Kremlin critic Alexei Navalny was fighting for his life in a Siberian hospital on Thursday after drinking tea that allies said they believe was laced with poison.

If confirmed, it would be the latest in a long series of poisonings and suspected poisonings of people who have fallen out with the Kremlin, which denies settling scores with its foes by murdering them.

Navalny, a fierce critic of President Vladimir Putin and his lieutenants, began feeling ill on a plane to Moscow on Thursday morning after drinking tea at an airport cafe in the Siberian city of Tomsk.

His condition became so serious that the plane made an emergency landing at the city of Omsk, en route to Moscow, where he was carried off on a stretcher.

Kira Yarmysh, his spokeswoman, said he was in intensive care in a serious but stable condition, and on an artificial lung ventilator in a hospital in the city, about 2,200 km (1370 miles) east of the Russian capital.

“We assume that Alexei was poisoned with something mixed into his tea. It was the only thing that he drank in the morning. Alexei is now unconscious,” Yarmysh said.

Kremlin spokesman Dmitry Peskov said that any poisoning would need to be confirmed by laboratory tests and that doctors were doing everything they could to help Navalny. He wished him a speedy recovery.

The incident coincides with a political crisis in Belarus, a close Russian ally, and comes ahead of regional Russian elections next month.

Some anti-Kremlin protesters in Russia’s far east have started chanting “Long live Belarus!” in support of the protesters in Minsk, 9,000 km (5,590 miles) to the west.

“Putin is scared,” said an EU diplomat, who declined to be named. “He is sending a message to his own people not to try do at home what they see on TV from Belarus.”

Doctors gave contradictory information about Navalny’s condition, saying it had stabilised and that he was in a coma, but also that there was still a threat to his life and they were working to save him.

Navalny’s wife Yulia flew from Moscow to be with him. Yarmysh said hospital officials had so far prevented Navalny’s personal doctor, who had also flown in, from seeing him.

Doctors were also refusing to discharge him so that he could be flown to Europe for emergency treatment, she said. The hospital said his condition meant he could not be moved for now.

Germany and France offered to provide Navalny with medical care on their soil.

An air ambulance with a team specialised in treating coma patients is due to leave Germany to pick up Navalny on Thursday evening, the Berlin-based Cinema for Peace Foundation said.

There is a long history of Kremlin foes being poisoned or falling ill after suspected poisonings.

They include Sergei Skripal, a former double agent poisoned with a nerve agent in 2018 in Salisbury, England, and Alexander Litvinenko, a Kremlin critic who died in London in 2006 after drinking green tea laced with polonium-210.

The Kremlin has repeatedly denied involvement in those and other incidents, calling them anti-Russian provocations.

Yarmysh did not say who she believed may have poisoned Navalny but said police had been called to the hospital.

Police said they had not yet opened an investigation.

A regional health ministry spokeswoman, Tatyana Shakirova, said doctors in Omsk had assessed his condition as serious and were doing everything possible to stabilise him. She said the cause of his illness was not yet clear but poisoning had not been ruled out.

Navalny, a 44-year-old lawyer and anti-corruption activist, has served many stints in jail for organising anti-Kremlin protests and has been attacked in the street by pro-government activists. He has published investigations into what he says are examples of official corruption, with his videos garnering millions of views.

Navalny and his allies were in Omsk to try to increase support for candidates they back in next month’s regional elections.

Pavel Lebedev, a passenger on the flight with Navalny, posted an account of what he saw on social media.

“At the start of the flight he went to the toilet and didn’t come back. He started feeling really sick. They struggled to bring him round and he was screaming in pain.”

Footage on social media showed a motionless Navalny being stretchered into an ambulance by medics after the emergency landing in Omsk.

The airline, S7, said Navalny had started feeling very ill soon after take-off and the captain had decided to make an emergency landing. He had not eaten or drunk anything on board, it said.

Navalny had a cup of tea at a Tomsk airport cafe before boarding his flight, Yarmysh said.

She drew a parallel with an incident last year in which Navalny suffered an acute allergic reaction that one doctor said could have resulted from poisoning with an unknown chemical.

“If (poisoning is) confirmed, those responsible must face consequences,” Linkevicius said on Twitter.