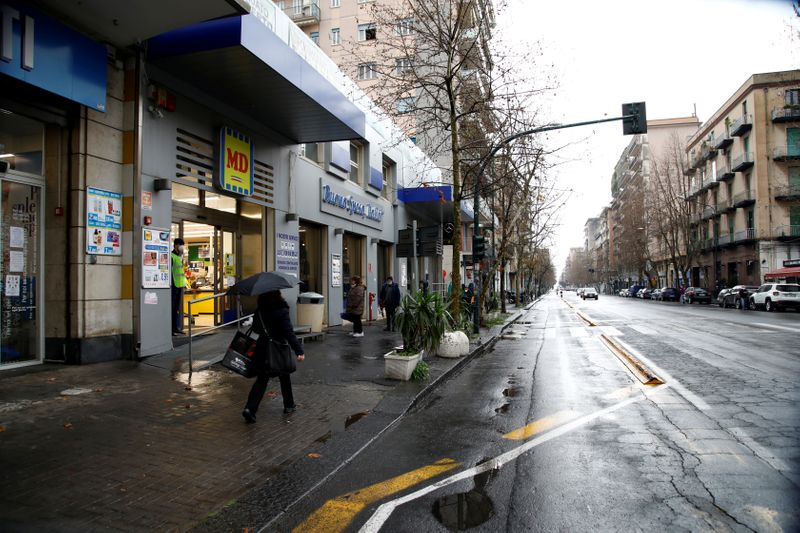 FILE PHOTO: A woman walks past a supermarket, as the Italian island of Sicily tightens measures to try and contain the spread of coronavirus disease (COVID-19), in Catania, Italy, March 23, 2020. REUTERS/Antonio Parrinello/File Photo

PALERMO, Italy (Reuters) – Sicily’s coronavirus emergency coordinator was arrested along with nine other people on Thursday on suspicion of corruption and rigging of health sector tenders while in his previous role, police on the Italian island said.

Antonino Candela was allegedly part of a “power base made up of businessmen and corrupt public officials” the police statement said, referring to activity before he became head of Sicily’s coronavirus response unit.

He was among those responsible for helping to rig public tenders for medical equipment and services worth nearly 600 million euros ($660.30 million) since 2016, in return for promised bribes of around 1.8 million euros, the police alleged.

Candela, who is under house arrest, was not immediately available for comment.

Candela was director of a provincial health authority in the Sicilian capital of Palermo, which issued the tenders along with a regional agency.

“This is an absolutely alarming and disheartening picture of the level of illegality in the Sicilian health system, where systemic corruption has allowed very large illicit profits,” the magistrates’ arrest warrant made available to Reuters said.

The police also seized seven companies based in Sicily and in the northern region of Lombardy, as well as some 160,000 euros in bribes allegedly already paid.

Italy has suffered one of the world’s worst outbreaks of the coronavirus, with more than 32,000 deaths, but Sicily has escaped relatively unscathed along with other southern regions.

“Those who steal public money, if the allegations are confirmed, do not deserve the esteem of so many honest people. Everyone must know that healthcare is not a business,” Sicily’s regional president Nello Musumeci wrote on Facebook.

Coronavirus: Call for review into exams ‘fiasco’ and depression doubles