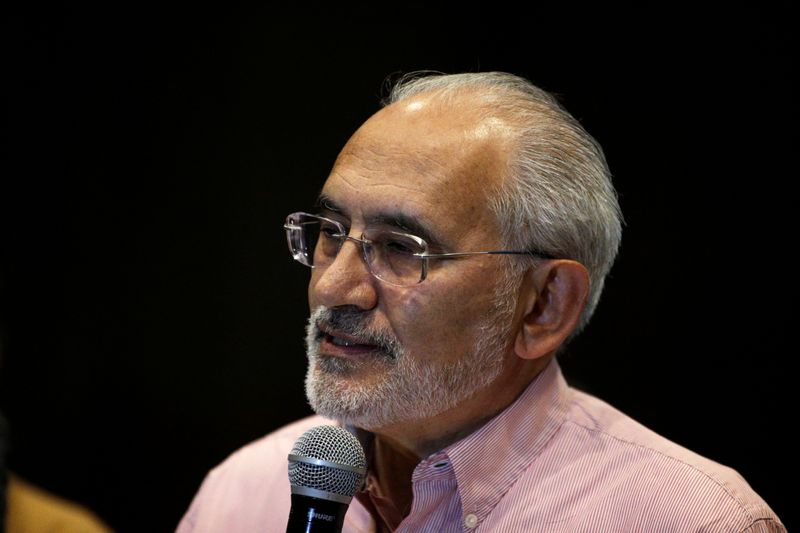 LA PAZ (Reuters) – Bolivia’s President-elect Luis Arce pledged on Friday to “rebuild” the Andean country after a tumultuous year of political turmoil and the pandemic, as the official vote count confirmed a landslide win for his socialist party.

The final tally showed Arce won just over 55% of the vote, sweeping the socialists back into power just a year after the party’s leftist leader Evo Morales was ousted amid protests.

The win draws the curtain on a painful period for Bolivia after an election late last year was dogged by disputed allegations of fraud, sparking violent protests, looting, and blockades, and eventually prompting Morales to resign.

“Now our great challenge is to rebuild our homeland in peace, to regain joy, stability and hope for a better tomorrow for all Bolivians,” Arce said on social media in response to the final result, with a video of his support around the country.

“We won’t let down the trust that people have placed in us.”

The count put Arce, a pragmatic economist who is credited with fostering Bolivia’s boom years from the mid 2000s, more than 26 points ahead of centrist runner-up Carlos Mesa, who had just shy of 29% – a far larger gap than had been expected.

Arce, who was economy minister under Morales, was seen as a moderating voice in his government. He told Reuters this week Morales would have no role in his administration.

Morales is living in exile in Argentina, but remains the president of Arce’s party, the Movement Toward Socialism, and played a key role in picking Arce as the party’s candidate.

With the backdrop of the COVID-19 pandemic and an economic slide, the vote was a body blow for Bolivia’s centrist and conservative parties, which played only a bit-part role in Morales’ near 14-year administration.

Caretaker President Jeanine Anez, who took over in the midst of a power vacuum last year, withdrew from the race in the election build-up, while Mesa led a muted campaign. Third place runner Luis Camacho was limited to a small conservative base.

Mesa, who also placed second in the since-voided 2019 vote, congratulated Arce on Twitter, though he already conceded defeat at the start of week when rapid counts showed a big Arce win.

“We will remain vigilant in the democratic opposition fulfilling the mandate of the people,” Mesa said.

Governments and observers have widely heralded the election for being peaceful and transparent – in contrast to the 2019 vote which led to running street battles between party supporters and security forces and the deaths of over 30 people.

Salvador Romero, the head of Bolivia’s electoral authority, said in a press conference late on Friday that Bolivia could celebrate “the closing of the count,” adding there had been huge voter turn-out despite the pandemic.

“With 88% participation, Bolivians set the second highest record in our history and one of the highest in Latin America in the 21st century,” he told reporters.

“This affirms how people want to live in peace and with institutions that fulfill their mission, and rejected the ominous predictions of confrontation and violence.”

Coronavirus: Staffordshire to move into Tier 2 COVID-19 restrictions ‘as soon as this weekend’ | UK News