Pakistan Army is always ready to thwart nefarious designs of enemies just like it defeated a much bigger enemy in the 1965 war with India, Chief of Army Staff (COAS) General Qamar Javed Bajwa said on Sunday.

He made these remarks while addressing an investiture ceremony held at the General Headquarters in Rawalpindi to commemorate the Defence and Martyrs Day. The day of September 6, 1965 is an unforgotten chapter of the country’s history which includes examples of nation’s solidarity, sacrifice and bravery, the army chief added.

“For the Pakistani nation, September 6 in not an ordinary day but it is a testament of our courage and commemorates sacrifices rendered by our martyrs of during 1948, 1965, 1971, Kargil and war against terror,” he said, adding, “Even today we are defending our freedom and country by shedding our blood”.

Gen Qamar said the country’s sovereignty, independence, peace and stability is still intact due to the sacrifices, courage and bravery of our soldiers and martyrs.

He also paid tribute to the families of martyrs, who were present in the ceremony, saying: “I want to assure you that we will never forget the sacrifices of your loved ones. The martyrs are our heroes and nations get annihilated when they forget the sacrifices of their martyrs. I salute your spirit of self-sacrifice and assure you that we are and will be with you at every step of the life. The whole nation is indebted to your patience and sacrifices.”

He also congratulated the officers, junior commissioned officers and soldiers who received the awards at the ceremony. “We are all proud of you for the professionalism you have shown while following the tradition of the Pakistan Army in the line of duty.”

The COAS said the state of Pakistan and its nation are the bearers of the ideology of separate Islamic identity and on this basis we achieved freedom. “This ideology is our identity today and tomorrow.”

“Our enemies have been hatching conspiracies to eliminate this ideology but Pakistani forces and the nation have thwarted their every move with the spirit of faith,” he added. “To safeguard and protect the country’s sovereignty and peace is the foremost duty of Pakistan Army.”

General Qamar said it is a great honour for him to command a brave and courageous force like the Pakistan Army.

He went on to say that every officer and soldier of our army, due to his professionalism, high discipline and selflessness, represents an army whose capabilities have been acknowledged worldwide.

While concluding his speech, the army chief cautioned against the fifth generation or hybrid warfare, saying: “Its purpose is to defame the country and the Pakistani forces and spread chaos. We will surely succeed in winning this war as well with the cooperation of the nation.”

The COAS conferred military awards to army personnel for acts of gallantry during various operations. 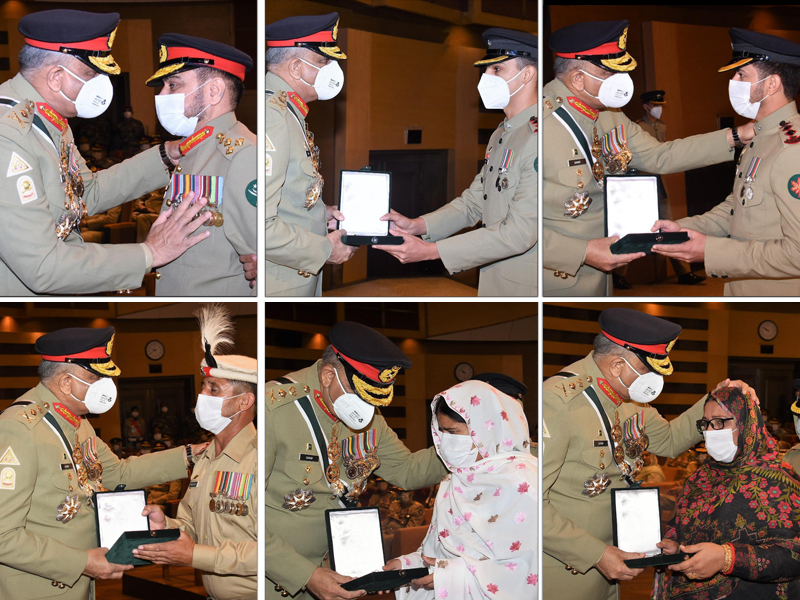 Families of Shuhada/Ghazis, senior serving military officers and soldiers also attended the ceremony. As many as 40 officers were awarded Sitara-e-Imtiaz (military), 24 officers/soldiers were awarded Tamgha-e-Bisalat and a soldier was honoured with United Nations (UN) Medal. Medals of Shuhada were received by their family members, according to the ISPR. 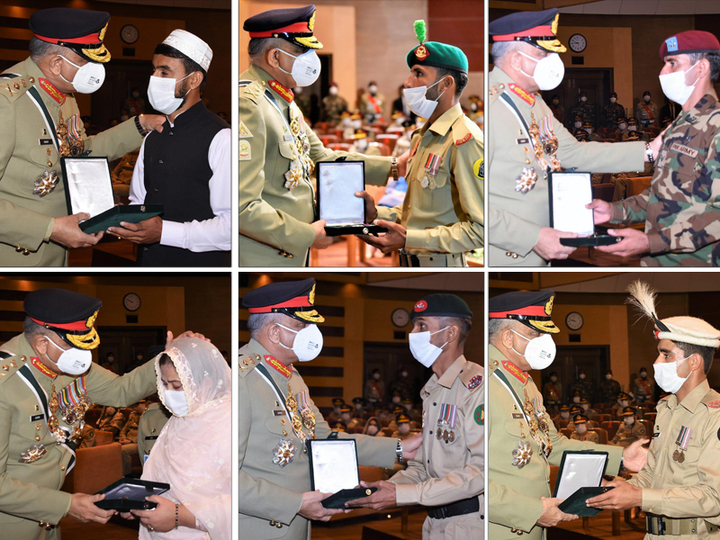 The entire nation along with armed forces observed the Defence and Martyrs’ Day to pay tribute the martyrs amd Ghazis and reaffirmed commitment to defend the territorial integrity and sovereignty of the country at all cost.

Wreath laying ceremonies were held at Shahuada monument at the GHQ and at graves and monuments of recipients of the Nishan-e-Haider, the country’s, highest gallantry award. A large number of people belonging to various walks of life attended the ceremonies to pay homage to the brave sons of soil who demonstrated indomitable courage and valour in defence of the motherland.

Pakistan to continue exposing India at every forum: Shibli Faraz

Maulana Tahir Ashrafi has been appointed as the s
Read More

The number of confirmed COVID-19 cases in Pakista
Read More